Sorry - kaberett is critically incapable of finding cheerful news at the moment, it turns out. On the plus side, lots to read this week...

Let's start out with "equal marriage": Zoe provides a trans-focussed critique at Complicity, while Meg Barker writes about opportunities opened up and shut down from a bi perspective. In international news that might well make you weep [content note: terminal illness], when DOMA was struck down in the USA, John Arthur and Jim Obergefell flew from Ohio to Maryland to get married. A federal judge has now ordered Ohio officials to recognise the marriage.

In disability and sickness news, we've got an analysis of DWP's slating of ATOS, the company responsible for carrying out the appalling Work Capability Assessments. Black Girl Dangerous writes that disease is not a metaphor - a cutting critique of ableist language. And from the history corner, let's take Suicide Is Not Beautiful, from Nursing Clio [content notes: specifics of individual suicides].

More: fees for employment tribunals begin - up to £1200 in cases of unfair dismissal. To be paid by the complainant. And the police are set to get sweeping new powers of dispersal.

Turning to Zoe at Complicity again, let's have a critique of the Twitter abuse button - it's designed to be abused.

And finally, let's turn to some slightly less horrifying conversations:
What have you been reading, writing, or thinking this week?
Posted by kaberett at 15:18 3 comments

In between all the learning lines, designing flyers and other Edinburgh-based preparations, five brave lashers set out on an adventure northwards last weekend to perform in the Newcastle Pride Trans Tent. We were super excited to be sharing a bill with Roz Kaveny and Bethany Black, and spreading lashings joy to a whole new city.

Here's what happened when we stuck a carful of lashers in an enclosed space for five hours. Twice.

Regular readers may be familiar with our very own Zim's alter ego, Ashes O'Reilly, and their band of immortal space pirates, the Mechanisms. If you're lucky enough, you may even have heard their new album, Ulysses Dies At Dawn. Having listened to it in the early part of our journey, we can confirm that you should definitely check it out - in fact, we liked it so much that we immediately shared this information with Mechanisms frontman, Jonny Sims - AKA Jonny D'Ville, AKA Jonny McBeard, AKA [REDACTED] - for fear that without a record of our enjoyment, it may vanish into the ether and we'd never enjoy anything ever again.

Thanks to a combination of several hours' worth of boredom, and the realization that Zim would transcribe anything said to them and send it in a neat little text message package, this quickly descended into us tormenting the aforementioned Mechanism with a barrage of messages to keep ourselves entertained on the long, open road.

And thus, LASHROADTRIPFEED was born. 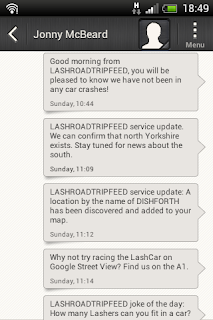 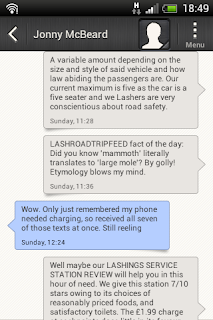 It's impossible to share an entire 8+ hours' worth of messages from two phones with you, but the highlights included facts and jokes of the day, service updates and a prize draw. Over the course of the first night, lucky LashFan Jonny Sims was given a complimentary flank, to thank him for his support. 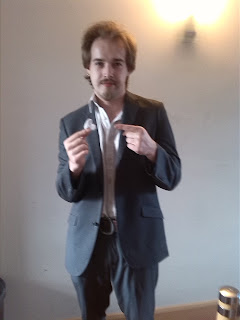 In order to keep things interesting, a Which Lasher Are You? Quiz was born, in which it was possible to find out which of the five travelling Lashers you are most like.

Obviously, you must all be itching to know which lasher you're most like as well so, because we're so good to you, we've included it below:

'Which Lasher Are You?' Quiz

1. Which mythical creature would you most want to eat?
(a) the cow that wants to be eaten
(b) a gryphon
(c) a chimera
(d) a poltergeist
(e) an ent

2. If you had a pet parrot, what is the first thing you would teach it to say to guests?
(a) 'Help! I've been turned into a parrot!'
(b) backhanded compliments
(c) 'Don't drink the tea! Whatever you do, don't drink the tea!' as soon as I left the room
(d) 'Awk'
(e) Its latin name

3. If you had to choose a single element to be entirely composed of, what would it be?
(a) plutonium
(b) fire
(c) the fifth one
(d) water)
(e) thallium

4. What would be your preferred method of murder?
(a) plutonium
(b) painting arsenic on my victim's walls then visiting them on their deathbed to deliver the final blow
(c) I can't tell you that in case of legal reasons
(d) giant octopus
(e) a carrot

5. It's 2073. the nuclear apocalypse has been and gone, taking everyone you know and love with it and you are struggling to survive. What colour shirt are you wearing?
(a) black
(b) purple
(c) the colour of the wasteland
(d) (robot voice) CHROME (/robot voice)
(e) teal

6. Which marine animal would be your familiar?
(a) otter penguin
(b) aquaman
(c) a cat that can swim
(d) japanese giant spider crab
(e) octopus

BONUS TIE BREAKER QUESTION
7. Would you rather live in an alternate reality where:
(a) the moon is made of double gloucester
(b) the board game 'Operation' is accurate training to be a surgeon
(c) hats are the hot topic of news stories and conversations at fancy parties; gossip magazines are devoted to their developments and love lives
(d) you can chew with your nose
(e) chlorophyll is blue

RESULTS
Mostly A: you are Patch
Mostly B: you are Zim
Mostly C: you are Sasha Rocket
Mostly D: you are Sally
Mostly E: you are Kabarett