Tales from a rehearsal

It's Sunday evening. The Lashers are making ourselves comfortable in the activist resource centre where we rehearse. A handwritten poster proclaims that anarchism is about everyone taking responsibility for their surroundings. The clutter in the room suggests that this message hasn't been entirely taken to heart - but all of it, from flyers to camping equipment, tells a tale about the various activist and campaigning groups that use this space. It's like a sort of activist Room of Requirement. Whether we need a screen for changing behind between acts, a bell to ring during the sci fi skits, or glue to attach eyes to sock puppets, we can usually find it here. OK, our requirements are a bit different from those of most activist groups. But the room still manages to meet them.

Email ThisBlogThis!Share to TwitterShare to FacebookShare to Pinterest
Labels: annalytica, lashings, tales from a rehearsal


Issue 9 of BoLT magazine is out now! BoLT is a magazine for bisexual, lesbian and trans women in Ireland, and it is edited by our good friend Ariel Silvera, who is lovely.

A researcher seeks non-monogamous people in the UK, to interview them about their experiences

Sady Doyle at Tiger Beatdown has written a really thought-provoking post drawing parallels between her experiences of Catholicism and feminism, and discussing what happens when we get full of righteous anger but don't examine our own flaws.

Avery Dame on the media depiction of trans people

New Beautiful Things Come is an alternate universe X-Men fanfic which is utterly, utterly beautiful in the way it weaves disability, queerness and mutant powers into the fabric of the characters' lives, while remaining a story about totally believeable and likeable characters rather than about Issues. It also contains a delightful tip of the hat to Lashings.


Posted by Lashings of Ginger Beer at 09:00 0 comments

One of the great things about performing with Lashings is getting to see all the other acts at the events we perform at. I'll admit, I'm not very proactive about seeking out gigs I might enjoy as an audience member, but when I get invited to an event as a performer, I get the bonus of having someone with similar tastes to mine having set up the event and chosen the acts.

Lashings have been fortunate enough to twice perform at the same event as the spectacularly talented CN Lester. CN is a singer, songwriter and pianist whose performances span an impressive range of musical genres, including opera, covers of artists such as Nina Simone and Leonard Cohen, and their own alternative music. They co-founded  En Travesti, a classical ensemble which explores gender representation, identity and ambiguity in opera, song and oratorio. They also write the blog "A Gentleman and a Scholar", which contains some really insightful writing on trans issues, amongst other things. Lashings loves CN Lester quite a lot.

I'm telling you about CN now because they have both a live performance and an album coming up very soon. En Travesti are presenting a mixed program of music from Monteverdi and Schütz on 29th September. All the details you need are here.

CN Lester's album Ashes is due to be released at the end of October. Based on their live performances, it promises to be heart-wrenchingly beautiful. By coincidence, it will also be my birthday in mid-November. Just saying.

Edited to add: Video! This is a montage of songs from CN's previous EP, available at http://itunes.apple.com/gb/artist/cn-lester/id340929388

Posted by Annalytica at 12:10 0 comments


I guess I should start with the main point of this post, and that’s:
ASEXUALITY =/= CELIBACY


Asexual people are physically capable of having sex. Seriously, you’d be amazed as to how many people doubt this. I’ve been asked whether being asexual means I look like a Barbie doll, y’know, ‘down there’. I don’t, but thanks for your concern, I guess? It’s got nothing to do with how I’m built, but rather, it just means I lack sexual attraction.

Asexual Awareness Week Asexy Census: This census is for those who are asexual, demi or grey, to gather demographic information about the community to be used in future research.


[potentially NSFW, photos in a bra and skirt] Bevin over at the Queer Fat Femme Guide to Life posted a little while back about her body painting session and how it ties in with appreciating and caring for her body. Several of the Lashers like to paint other people or themselves, but somehow I had never made an explicit connection between decorating your body and loving it! (Plus the pics are just beautiful.)

Posted by Lashings of Ginger Beer at 09:00 0 comments

An Infinite Capacity for Love and Joy: Queer History, S/M and T.H. White


Sometimes we find bits of our history in the most surprising places.

Have you ever heard of T.H. White? I won't be offended if you say no! On the other hand, it's quite likely that you've come across some of his work at some point, and just haven't registered his name. Anyone who is, like me, a fantasy nerd or obsessed with all things King-Arthur-related has probably come across his Arthurian series, The Once and Future King. You may also, if you misspent as much of your youth watching Disney films as most of Lashings did, have seen The Sword in the Stone, an animated version of the first and most-child-friendly of the books in the series. 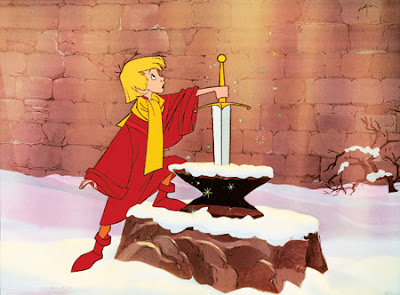 [Description of image: A still from Disney's The Sword in the Stone. A very young King Arthur is shown about to draw a sword out of an anvil and stone]

Broadway and West End geeks may also have come across the 1960 musical Camelot, which is based on the more adult portion of White's work:

This clip is from a modern (2006) production, which seems to pick up on a lot of the themes I'm about to expand upon below. Also... hiiiii, Bobby Steggert :)

[Description of video: Mordred, King Arthur's illegitimate son, sings about how he enjoys being immoral while dancing around in a bondage outfit and a pair of high-heeled boots. Lyrics here.]


White wrote his four/five-novel cycle (there's a fifth volume which was never published during his lifetime) immediately before and during World War II. It tells the story of King Arthur, from his origins as an ignored and overshadowed orphan boy to the night before his death.

(What does all this have to do with kink? Don't worry, we'll get there eventually!)

Read more »
Posted by Lashings of Ginger Beer at 09:00 0 comments

Bitch magazine discusses American Apparel's search for the next XL top model, and the response of Nancy Upton, who is protesting against the meat-market aspects of the contest by entering pictures of herself posing as a roast pig, and covered in salad dressing (not in the same picture!) She also parodies fat girl stereotypes by eating in almost every picture. Her protest has had mixed responses, with some people thinking she is setting out to mock the other entrants (she's not). As Feministe puts it:

Signal boosting: Wordpress refuses to do anything about a "hitlist" of trans women on a transmisogynist blog.

The Women's Budget Group and Platform 51 have produced a toolkit to support women who want to campaign and lobby locally. It is aimed at individuals and groups who may be campaigning from a marginalised position, or who lack experience of lobbying and developing effective campaign strategies.

Feminist analysis of My Little Pony, as it was and as it is now. It's worth adding to the points made in these articles that the new ponies are definitely skinnier than they used to be, in a way which makes them distinctly less pony-shaped.
Trigger warning: the first episode of My Little Pony: Friendship is Magic (which you'll probably want to watch after reading the second piece) features a couple of occasions when big hair is mocked.

Call for papers - Doctor Who and Race: an Anthology.

BadRepUK have a series on women and protest through history, all of which is brilliant, but the biggest how-did-I-not-know-that?! moment for me was reading about the suffragettes who knew Jujutsu.

Posted by Lashings of Ginger Beer at 09:53 0 comments

Can feminists be funny?

OK, OK, here's one:
Q: What do you get if you cross, um, Silvio Berlusconi with... an accusation of sexism?
A: Silenced! Haha?

What? Not laughing? But... it's topical, nearly... and, and it's funny because it's true, right? Oh. Yeah. It's sad that it's true - that's the one. But at least it isn't as bad as all those how-many-women-does-it-take-to-screw-in-a-lightbulb jokes - the ones that, while still being rather sad, also manage to be, well, not actually true. Not really. They're just playing on popular stereotypes and being generally misogynistic*.

Or... oh... maybe I'm just one of those humourless feminists.

BBC Radio 4 have a program discussing some aspects of sex and gender in science fiction.

Sociological images asks whether facebook advertising is exploitative, and touches briefly on the fact that it targets its ads based on how you have listed your personal information. Our facebook sketch, for those of you who haven't seen it, explores specifically the way that facebook genders its ads based on assumptions of what men and women will be likely to buy.

By artist Nicole Lorenz: Fat Ladies in Spaaaaace!: A Body-Positive Coloring Book. It's going on the Lashers' Christmas list!

This has needed to be said so badly and for such a long time: You Can't Smash Patriarchy With Transphobia: It is time to end the tolerance of transphobia in radical feminist circles, argues Ray Filar @ thefword.co.uk

If we, as radical feminists, are for the idea that biology is not destiny, we cannot simultaneously hold the opinion that, "a trans-sexual 'woman' will always be a biological male" (or vice versa).

Posted by Lashings of Ginger Beer at 08:12 0 comments

I'm the kind of person that people apologise to when they realise they've just sworn in front of me. When I tell people I perform cabaret, the most common reaction is disbelief. That sweet, quiet little girl who mostly just stays out of everyone's way, she gets up on stage in front of an audience and sings and dances and acts? Surely not.

The other contradictions I've written about aren't really contradictions at all; rather they're terms that people tend to get confused about, and I've tried to explain the terms in a way that makes it clear how they can co-exist. But the tension between, on the one hand, my apparent sweetness and shyness and fear of rocking the boat or upsetting anyone, and on the other hand, my anger and my need to speak out against injustice, this is a much more profound contradiction. It's also one which is intimately tied up with my relationship with feminism.